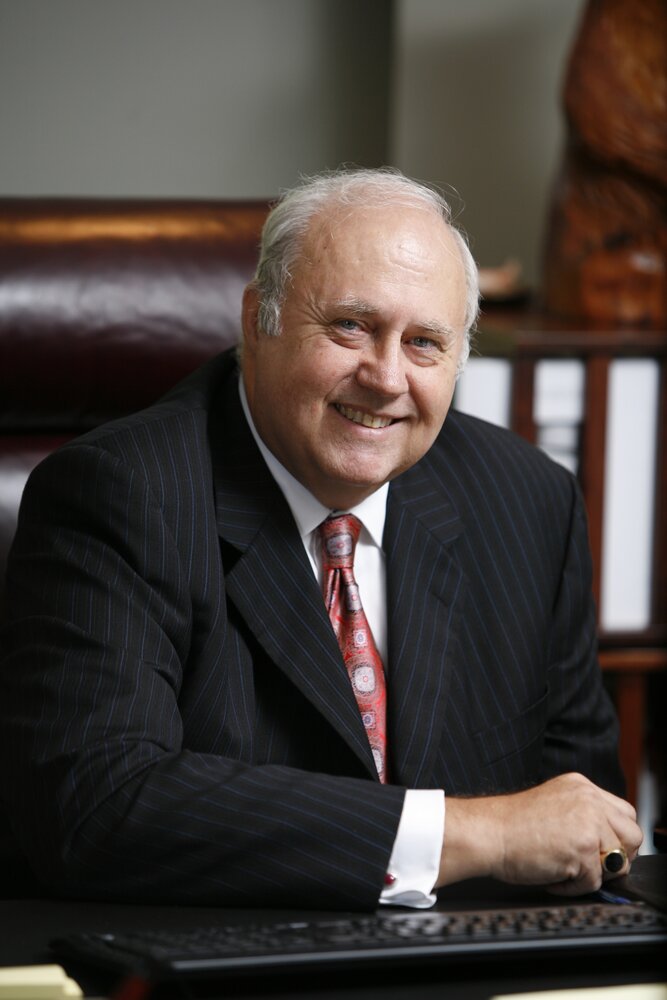 “Barry Nace would ride a mule over the rim of a canyon for a cause.”

Such was the reputation of one of Washington, D.C.’s most decorated and successful trial lawyers. His story was one of self-determination, hard work, and dedication to the civil justice system, his clients, and, mostly, his family. On Monday, November 22, 2021, Barry passed away in Hilton Head, S.C. with his wife of 48 years Andrea by his side as always.

Born in York, PA in 1944, Barry Nace moved around throughout his adolescent years. His youth was focused on little league baseball. Baseball played a central role in his life, from his time playing, to coaching his three sons, attending a Phillies Dream Week, and finally watching his beloved Nats –win the World Series in 2019.

Barry graduated from Dickinson College with a Bachelor of Science in Biology. In 1969 he then obtained his Juris Doctorate from The Dickinson School of Law, which later conferred upon him a Doctor of Laws, Honoris Causa. After graduating law school, he accepted a position with W.R. Grace in Crystal City. It was at W.R. Grace that a patent paralegal asked him, or more accurately, directed him, to move her desk. Three years later Barry married Andrea Giardini.

Yearning for the courtroom, Barry left W.R. Grace and accepted a position with well-known Washington lawyer Earl Davis. It was under Mr. Davis’ tutelage that Barry began representing individuals who had been harmed through the negligence and carelessness of others. Over a nearly fifty-year career at the law firm he founded, Paulson & Nace, PLLC, Mr. Nace developed a reputation as a zealous advocate whose authenticity resonated with jurors. His dedication to his clients’ cause found him at odds with defense lawyers and judges, though even his staunchest critics had no choice but to admire his commitment to his clients.

His willingness to take on righteous causes found him representing Jason Daubert, who contended that a morning sickness drug, Bendectin, was the cause of his birth injuries. Mr. Nace argued that the Federal Rules of Evidence, applicable to all federal court cases, properly empowered a jury to decide what weight to give expert testimony, even if such evidence was not “generally accepted.” The case, Daubert v. Merrell Dow Pharmaceuticals, Inc. is one of the Supreme Court’s most cited civil cases. The Supreme Court opinion was a 9-0 win for Jason Daubert.

Mr. Nace’s commitment to victims and the civil justice system was not limited to representing individuals in court cases. He was the only person to twice serve as president of the Trial Lawyers Association of Metropolitan Washington, D.C.; he served as president of the Association of Trial Lawyers of America, now the American Association for Justice; and he served as president of the National Board of Trial Advocacy. He was an elected member of the International Academy of Trial Lawyers. Throughout his career he made a point of teaching young lawyers and encouraging them to fight to preserve the Seventh Amendment right to trial by jury. He received numerous awards in recognition of his service to the bar, most recently receiving the AAJ Leonard Ring Champion of Justice Award in 2020.

In a nod to his importance to the Washington, DC plaintiffs’ bar, the Trial Lawyers Association of Metropolitan Washington, DC announced that its trial lawyer of the year award will be named after Mr. Nace.

Despite his deep commitment to the law and his profession, Barry valued his family above everything else in his life. Barry and Andrea Nace were married 48 years. They raised three sons, Christopher, Jonathan, Matthew, all lawyers. Barry’s dedication to his clients paled only in comparison to his commitment to his family. Having come from modest means, Mr. Nace did everything in his power to help his sons excel in life. There was nothing more important to him than his family. He traveled the world with Andrea from China, to India, all throughout Europe and Africa, and even into the Red Square.

He is survived by his wife Andrea, his sons Christopher (45), Jonathan (42), Matthew (40), his grandchildren Daniel (9), Allegra (7), Charlotte (5), and Logan Nace (4); and his two daughters-in-law Tracee Wagner Nace and Kristen Matlock Nace.

A scholarship is being created in Barry’s name at Penn State Dickinson Law. In remembrance of Barry’s life, the family asks that any memorial gifts be made to the Barry J. Nace Scholarship at

A visitation will take place December 14, 2021, from 6:00 to 8:00 p.m. at Little Flower Catholic Church in Bethesda. A memorial service will be held December 15, 2021, also at Little Flower, time TBD. islandfuneralhome.com

Share Your Memory of
Barry
Upload Your Memory View All Memories
Be the first to upload a memory!
Share A Memory
Send Flowers