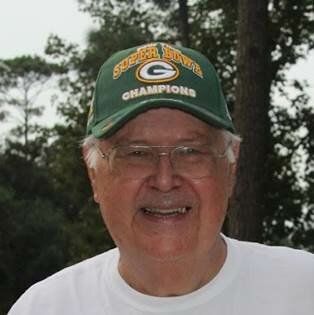 Lee James Sturm, 80, of Hilton Head, South Carolina, passed away on Friday, November 5, 2021, after a long series of illnesses.

Lee was born on June 27, 1941, to Ernest and Garnet Sturm in Mattoon, Wisconsin, and spent his childhood in Tomah. He moved to St. Louis, Missouri, at age 13 and grew up there, graduating from DeAndreas High School and Southern Illinois University with a degree in Geography. In high school, he met Judy Nienhaus who became the love of his life and his lifetime companion. They married in 1963. Lee and Judy went on to have 5 children: Cristine, Mark, Tim who preceded him to Heaven at age 7, Andy, and Gary.

Lee had a successful career as a cartographer and physical scientist at the Defense Mapping Agency (now NGA - the National Geospatial-Intelligence Agency) in St. Louis and later in Washington D.C.  His cutting-edge projects included developing maps of the moon and early computer-based mapping. He was a dedicated volunteer for much of his life, leading the establishment of the St. Louis Ronald McDonald House, and Candlelighters (a support group for parents of children with cancer). In Hilton Head, he supported the Hilton Head Bridge Club and was a loyal Knight of Columbus and a volunteer at St. Francis by the Sea Catholic Church for many years.

At retirement in 1997, he and Judy moved to Hilton Head where they lived happily. He framed thousands of pictures from his garage-based business. They entertained, traveled, and played countless rounds of bridge with dear friends and family. With his family, he enjoyed float trips, camping, memorable meals, making things, holidays, field goal kicking competitions, and listening to music, especially music played by his children. He was a lifelong Green Bay Packers fan as his attire usually attested.

He is remembered by his grandchildren as a great storyteller and fisherman. They include Sol Sturm of Ft. Collins Colorado, Tariq and June Gardner of Arlington, Virginia, Julia Sturm of Ft. Collins, Colorado and Carley, Miles, Morgan, and Henry Sturm of Martinsville, Virginia. He was beloved by his daughters-in-law, Celeste, Susan, and Jessica Sturm, and his son-in-law David Gardner. He will be missed by his sister Barbara of St. Louis. He was preceded in death by his brother Tom who, with Tim and many others, has welcomed him to Heaven. He will be missed too by many extended family members and so very many friends.

A funeral service will be held at 1 pm on Wednesday, November 17 at St. Francis by the Sea Catholic Church in Hilton Head. In lieu of flowers donations to Ronald McDonald House Charities www.rmhc.org or St. Jude Children’s Research Hospital www.stjude.org are appreciated.

Share Your Memory of
Lee
Upload Your Memory View All Memories
Be the first to upload a memory!
Share A Memory
Send Flowers