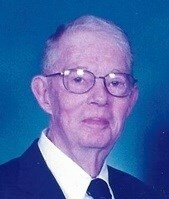 May 24, 1928 - September 23, 2021 Hilton Head Island, South Carolina - Frederick Jerome (Jerry) Darnell, 93, of Hilton Head Plantation, died September 23, 2021 at the Preston Health Center. He was born May 24, 1928 in Washington, DC, the son of the late Frederick W. Darnell and Bertha V. Payne. After public schools in Washington he graduated Phi Beta Kappa with a BS from Yale University, and received his PhD in physics from Carnegie Mellon University. He married Elaine English in 1952. He joined the DuPont Company in Wilmington, DE in their Central Research group, where he worked for 34 years, retiring as Director of Analytical and Information Sciences. He was a member of Sigma Xi and active in the American Physical Society. He moved to Hilton Head Island in 1989, and was active in tennis as a member of the Spring Lake Tennis Club, and as a USTA umpire. He participated in the Hilton Head Plantation Yacht Club and served as Commodore in 1994. He earned the rank of Senior Navigator with Full Certificate in the US Sail and Power Squadrons, and taught celestial navigation courses for the Hilton Head Squadron. He volunteered as a tutor with the Literacy Association of the Low Country, and then became a driver for Second Helpings, where he also was treasurer for six years. He worked with Volunteers in Medicine for 17 years, and also with the Hilton Head Hospital Auxiliary. He moved to the Cypress of Hilton Head in 2002, where he served on the finance committee and on the Regime Board, and began to enjoy the challenges of six-wicket croquet. Surviving are son, Stephen F. Darnell of Camas, WA; son, Gregory N. Darnell and daughter-in-law, Joan of Olympia, WA; and granddaughter, Claire of Mt. Vernon, WA. He was preceded in death by wife, Elaine English Darnell and daughter, Katherine Ann Darnell. A Memorial Service will be held at the Cypress of Hilton Head at a later date when traveling and congregating are safer. Remembrances may be made to Second Helpings, P.O. Box 23621, HHI SC 29925, or Volunteers in Medicine Clinic, P.O. Box 23858, HHI SC 29925.