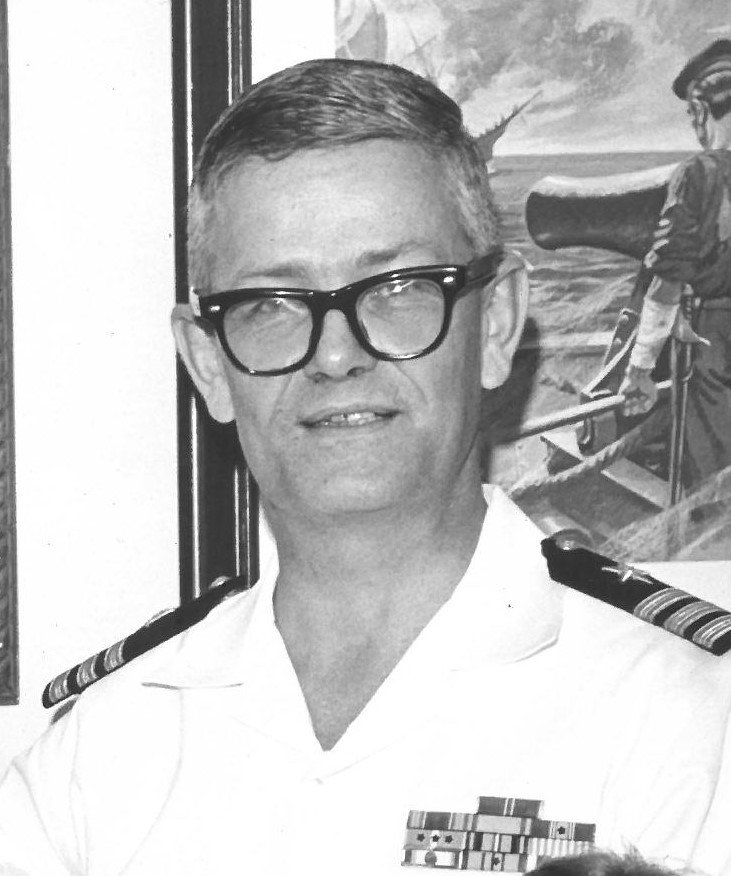 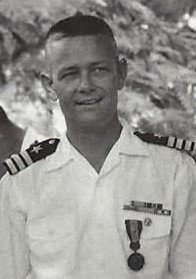 Retired CDR Willard R. “Bill” Olson, USNA Class of 1951, age 92, passed away on May 25, 2020 – Memorial Day – at home with his family and Wife, Ede, by his side.  He was born November 2, 1927 in Chicago, Illinois to Burt Olson and Amelia Hounsell Olson.  Bill was raised in Superior, Montana in his early youth and then in Alberton, Montana where he worked as a Brakeman on the Chicago, Milwaukee & Pacific Railroad in the Bitterroot Mountains.   After graduating from Alberton High School (Valedictorian….with 6 in his graduating class) – where he excelled in Mathematics, Science and enjoyed Football – Bill joined the US Navy July 18, 1945 at seventeen years old.  World War II’s Battle of the Bulge and other WWII battles influenced his decision to support the shortage of manpower required in Northern Africa, France, Germany and when the U.S. Military recruited personnel from the Nation’s Railroad – Bill and his High School friend suited up and became a Radar Operator prior to WWII ending less than two months later on September 2, 1945.  Bill’s Mother was instrumental in securing Montana’s Senator Mansfield’s appointment to the USNA in July 1947 and graduated Class of 1951 with an Electrical Engineering degree.  Bill served in the North Korean War and while attending the Navy Post Grad School in Carmel, CA in 1956 – Bill met Ede Stepp, a Physical Education teacher for Monterey County schools.   They married at the Church of the Wayfarer in 1958 and had three children.  The next few years included stations in San Francisco and San Diego.  Through the 1960’s, Bill and Ede were stationed throughout the Globe – which included a tour on the Oriskany; Pittsfield, MA; Yokosuka, Japan; and while Bill was assigned to Special Forces in Vietnam – Ede remained with the children in Coronado, CA.  Bill returned to the Naval Academy after serving in Vietnam, to teach Calculus, from 1967 to 1970.  Bill was instrumental in supporting the local government and school districts during desegregation in Annapolis 1968 and was successful with the West Annapolis (Adams Park) Principal/Teachers in forming the first PTA Program.    Bill was then stationed to the Pentagon for a final tour and decided to remain in NOVA where he could keep his kids in the same spiritual, education and sports programs.  Bill was an avid Sports fan, especially Soccer!

After retiring from the Navy, Bill went to work for RCA/General Electric and then he and Ede retired to Hilton Head Island, SC in 1991.  Bill and Ede have enjoyed 61+ years of marriage; enjoyed many years of traveling/family reunions and Bill’s community gifts including The First Presbyterian Outreach Committee as a Deacon, chairperson for the Martin Luther Fifth Saturday prayer breakfast workday, tutoring in the “Strive” program at Hilton Head Island High School, emphasizing the importance of education, while serving on many Beaufort County committees.  He served as interim chairperson for Mike Bull’s tri county math workshops.  Bill also initiated First Presbyterian’s exchange evening of music and praise with the Congregation of the African American Baptist Church.

Bill is survived by his wife of 61 years Ede; son - Robert Brian Olson of Clifton, VA (with Shelbie Olson and 5 grandchildren – Abigail, Samantha, David, Charis and Liam), Kathleen Roberta Olson of Ashburn, VA (with Ken “Patrick” McCarthy and 1 granddog - Kaleb), and Thomas Edward Olson of Forest Grove, OR (with Gretchen Olson and 2 grandchildren – Johnathon and Julia).   Amidst Bill’s honors during his Navy tenure – including the Bronze Star from Vietnam 1966…..at age 82, he was asked “What are your dreams for your life, Bill?”  And his reply:  “…At this stage in my life, my dreams center around my children and grandchildren.   My wife and I strive to provide the resources needed to enable them to achieve their goals…”

Share Your Memory of
Willard
Upload Your Memory View All Memories
Be the first to upload a memory!
Share A Memory
Send Flowers