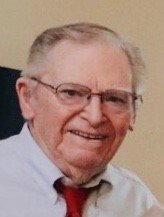 On Friday, November 1, 2019, Frank Junger of Fogelsville Pa, loving husband of Barbara for 62 years and father of Eric and Amy, passed away suddenly at the age of 84.  He was a Vietnam Veteran, a Major in the USMC, an avid golfer, a die-hard Met fan (at least after the NY Giants moved to San Francisco), an Exec at Bell Labs, a friend to anyone in need, and the best husband, father, grandfather and great-grandfather ever. Born 13 September 1935 in Paterson NJ, he fell in love with the Low Country while serving at MCAS Beaufort in 1965-67 and returned annually ever after. Graduate of the University of Pennsylvania’s Wharton School of Business, he also held a master’s degree in Economics from Fairleigh Dickenson University. A member of the Parris Island Living history detachment he held court as the eldest member of the Detachment and assumed the position of “Senior Officer Present Afloat or SOPA” at every event he attended. He was an active parishioner of both St. Francis of Assisi Catholic Church in Allentown, PA and St. Francis by the Sea Catholic Church on Hilton Head Island, SC. He was preceded in death by his father, Fritz Junger and his mother Mildred Wagner.  He is survived by his grandchildren Sean, Katie, Jason, Allie and Kate, and great-grandchildren Landin, Lukas, Isla, and Jameson. Known by all for his big heart and sometimes off color jokes, heaven is going to be a better place for our loss.   A Mass of Christian Burial will be held on Saturday, November 9th at 2:00 at St. Francis by the Sea in Hilton Head, SC.  In lieu of flowers, donations can be made to: Parris Island Historical and Museum Society (https://www.historyofmarines.org) or to the Semper Fi Fund (https://semperfifund.org).

Share Your Memory of
Frank
Upload Your Memory View All Memories
Be the first to upload a memory!
Share A Memory
Send Flowers