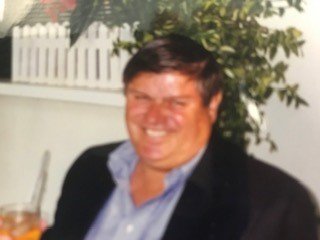 George L. Ruckno, Jr. 74, of Hilton Head Island, SC, passed away on Wednesday, October 23, after a long courageous battle with cancer. He was born in Wilkes-Barre, PA to Elizabeth Caffrey Ruckno and George L. Ruckno, Sr. on July 8, 1945.  He spent the early part of his life in Wyoming Valley, PA, living in Forty Fort, Kingston and Dallas. After attending grade school at Forty Fort Elementary, St. Nicholas in Wilkes-Barre, and Gate of Heaven in Dallas, he went to High School at Cranwell Preparatory School in Lenox. MA.

Always an avid sportsman, at Cranwell he excelled in ice hockey, football and baseball, and was always so proud to tell his family and friends that he was invited to try out for the Yankees. His father vetoed this idea and insisted he go to college and study engineering. He briefly attended Lehigh University, but his academic enthusiasm seemed to dissipate after the discovery of fraternities, girls and beer! He returned home and received a business degree from Keystone Junior College. He went on to work at the SPCA, Beacon Loan Co. and eventually into the family business of George L. Ruckno Construction Company where he was a salesman and project supervisor until he retired in the early 1990’s.

George was very much involved in the local sports scene. He was a born with a very competitive nature which helped him to win two Pennsylvania state championships in racquetball which gave him the opportunity to play with Pittsburgh Steeler star Franco Harris.  Also, he played American Legion baseball, was an avid tennis player and competed in many local races, such as the Cherry Blossom, Forty Fort Five-miler, and the July 4th Harvey’s Lake run which he initiated, including the famous after parties at Ruckno’s Pond. Those who ran with him at the lake, can finally say “Bye George”.  He was an active member of the Wyoming Valley Ski Club and enjoyed many ski trips with family and friends to Vermont and Lake Tahoe.

Nothing brought him more joy than playing and beating his kids and nephews in tennis and bragging about it later at the “pond”. On the other hand, George shared his skill and enthusiasm for sports by coaching little league baseball in Forty Fort.

George took great pride in the success of his children. This pride grew as he hyperbolized and exaggerated their accomplishments and these stories would be referred to with affection as “Georgisms”.This tradition would continue with his grandkids as he was quick to tell you that his granddaughter was going to Wimbledon soon or his grandson was ready for Division One Football while still playing in middle school.

He discovered Hilton Head Island in the mid-eighties and thought he found paradise. His love of tennis and bridge led to him spending more and more time on the island. His home was always open to friends and family and many of them ended up following George to the island and remain here to this day. He was very involved with the Hilton Head Island singles club where he fostered great relationships that lasted for years. George was a modern-day version of “Cupid” as many of his closest friends can thank him for introducing him to the “Loves of their Lives”.

George had a great love of animals and, in spite of being very allergic to cats he drove an abandoned cat from Pennsylvania to Hilton Head Island where it has kept George company for the rest of his life. He also had a community of squirrels who lived in his backyard and enjoyed his endless hospitality.

Over the course of his life, he had a particular interest in World War II. He studied and learned every facet of the war and could dazzle you with his knowledge of details and statistics. Despite no military background he was fondly known as “The General”.

George was a life-long Penn State Football Fan. His Saturdays in the Fall, if he was not attending the game at State College, would be spent hosting a football party at home.

Above all else George was known for his generosity and kindness to so many. He gathered around himself friends, family, acquaintances, and anyone in need of a friend. Everyone was invited to visit, to stay and enjoy his hospitality.  He made it his personal responsibility to assure that all of his guests would have a wonderful experience.

To say that George was “One of a Kind” is an understatement. He will be sorely missed by so many.

He is also survived by three brothers:  Louis, Charles, and John; three sisters, Mary Siegel, JoAnn Jones, and Elizabeth Black, and many nieces and nephews whom he cared about like they were his own kids.

In lieu of flowers, please consider a donation to the Community Foundation of the Low Country, where a fund is being started in his name, or a charity of your choice.

As service will be held at St. Andrew by The Sea, 20 Pope Avenue, HHI, at 1:30pm on Tuesday, October 29, with a Celebration of Life at the Spanish Wells Club House at 5:00pm.

Share Your Memory of
George
Upload Your Memory View All Memories
Be the first to upload a memory!
Share A Memory
Send Flowers